About the Harmonic Egg Here’s how one medical professional describes it

“The Harmonic Egg is a large chamber in the shape of a large dodecahedron egg. This innovative technology offers deep relaxation / stress relief through light, frequency, vibration and sound in a sacred geometric shape. The client reclines in a zero-gravity chair while being surrounded and embraced by soothing light, sound and vibration. My experience in the Harmonic Egg was one of complete peacefulness and a level of deep stillness and relaxation that I had never experienced before.”

A message from the Inventor

What we have created is a resonant chamber for relaxation and de-stressing the body. We use frequencies, vibration, sound and light waves to bring the body back into balance from a world filled with chaos. Everyone has stress and trauma in their lives. Stress is the number one killer these days. 90% of all visits to the doctor can be traced back to stress or trauma. It’s epidemic. Never before have we had so much stress. The environment, politics, the economy, families, children, jobs and the list goes on and on.

The Harmonic Egg experience is a restorative emotional and physical response to light & sounds promoting a sense of internal balance and well-being.

Sound and light healing is not new. Its roots date back to more than 40,000 years ago with the Aboriginal people in Australia. They are most known for the use of the Didgeridoo to influence the health of bones and muscles. In addition, to get energy to move and break up stuck emotions. The root cause of most dis-ease is stress. Stress is the only cause we truly acknowledge, but emotional trauma and stuck energy are very real.

We are sound and light beings and our lives began with an egg. Why not heal with sound and light in an egg? Just makes sense to me. I had a vision to build a huge wooden egg for healing, using sound and light. The Harmonic Egg was born in 2016 and we went into production in 2017 to bring this modality to the world. We get daily inquiries from people wanting to open centers and/or have access to this amazing modality.

The Harmonic Egg offers deep relaxation for the body to reboot/reset. Sometimes the body is spinning with so much trauma and chaos it can’t get back to “normal”.  Sitting in a resonant environment may help sync the cells (as has been demonstrated in many science experiments where coo-coo clock pendulums all start swinging in sync after being in a room together). The cells can reset and re-balance to encourage natural healing. When the body is in balance and relaxed it knows how to heal.

This is why meditation and yoga, just as two examples, work so well for people. People relax listening to music and getting a massage. The Harmonic Egg differs in that the “music” is not dissipating into the ether of a room or environment. It’s contained in the sacred geometry of the egg. I know of no other modality that can do this. The design of the Harmonic Egg uses mathematics of 3,6, and 9.

“If you knew the magnificence of the three, six and nine, you would have a key to the universe.” ~ Nikola Tesla

Tesla believed that the numbers 3, 6, and 9 had extreme importance. The Harmonic Egg is designed with this in mind. Have we unlocked the key in some way for the body to heal? The music is selected and studied to work within the geometric pattern inside. Hundreds of music selections were studied and considered for the Harmonic Egg. Only a few are mastered, mixed and recorded properly for use in the Harmonic Egg.

The Harmonic Egg is a secluded meditative medium to allow for personal reflection by letting go of worldly distractions and stress while embracing light and sound energy to feel a restorative emotional and physical rebooting/rebalancing.

There are many amazing artist and producers out there, but not all work with the acoustics of an egg chamber. We hope this information helps you to understand why the Harmonic Egg was born.

There are many more details for you to explore. I would also love to see you try it out for yourself and let us know what you think.

Many Blessings to YOU ALL. 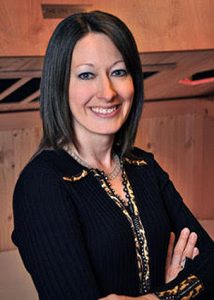 At age 37, Gail was told by her doctor that she had the heart of an 80-year-old. What?! A major factor—high stress from a diverse and challenging career path of 15+ years without healthy work/life balance. She was an engineer in the automotive business, an entrepreneur of a telecom consulting company, and, later, a Hollywood movie producer. She came to the point of “burn out” where something had to give to restore her quality of life.

Needing to immediately address her cardiovascular situation in 2007, she flew to Arizona for sessions in the Life Vessel, a full-body light and sound therapy modality. Experiencing the turn-around of her health (and hearing compelling stories of others) inspired her to extensively research light and sound therapy. Studying how it works and how it has been used since ancient times set the stage for the upcoming phase of her life. That research helped form a new foundation for her life to replace the one that would dismantle several years later. In 2010, she opened her own light and sound healing center.

With ongoing research and learning from the testimonials of thousands of clients over several years, Gail was primed to take sound and light therapy to a new level in 2016. Well-versed in the dynamics of both the Life Vessel and Energy Genesis (first- and second-generation modalities respectively), she had keen insights on what worked well and which aspects could use an upgrade.

Ironically, during a car accident she lost consciousness for approximately 20 minutes and had a vision of a new 360-degree healing modality. That vision brought insights for delivering a higher quality of sound without compression or distortion of the vibroacoustic. Changing from a flat bed to a zero-gravity, carefully-crafted new chair would allow greater comfort for the client. Finally, the capsule design would be in the shape of an egg derived from the dodecahedron geometric form.

Though Gail was told by many that this new design (to be made of wood) would not be possible, she and another engineer made it happen. After a year of rigorous research and work to overcome challenges of the unique design, the Harmonic Egg (HE) protype was complete.

The dodecahedron design and natural materials enable the chamber to resonate sound in a holographic-like, micro-environment. In other words, you can’t tell from where the sound is coming because it’s everywhere, utilizing various speakers according to the personalized settings for the client! The proprietary angles and ratios build upon ancient teachings and text—an ingenious, modern design that facilitates an optimal delivery of frequencies and vibrations into the body.

After attending the International Association for Music as Medicine Conference in Barcelona, Spain in June 2018, it was discovered that the Harmonic Egg was in a class all its own. There is no other encapsulated, vibroacoustic model like it anywhere in the world. With its painstaking adherence to quality on every front—from the dodecahedron design, to the vibratory quality of light, music, and comfort for the client, this cutting-edge modality is 40%+ more effective than previous top-of-the-line modalities. Silvia is a bilingual native of Mexico City who migrated with her family to the U.S. at the age of 4 and has lived most of her life in the surrounding Bay Area and East Bay.  She is a licensed minister in the State of California and is transitioning from 25 years in the healthcare industry (database and project management) to follow her passion in alternative healing modalities.  She began her spiritual journey in November 2009 following a turning point in her life where digging beneath the surface became necessary.  No longer wishing to repeat the same patterns and truly longing for a deeper connection and meaning, she began asking the universe for guidance.  Within a short time, she was introduced to a spiritual training center in Castro Valley and delved into an intensive 12 month Clairvoyant Training Program.  This was a time of deep self-exploration where she applied principles of spirit-to-spirit communication in neutrality, awareness and amusement.  In April 2011, Silvia decided she wanted to go deeper and embarked on a 14 month Hands on Healing Program (working the spiritual body within the physical body).  As part of her training, she performed psychic readings and aura healings at psychic fairs, assisted monthly in the various healing clinics (Out of Body Healing Clinic, and Hands On Healing Clinic), the annual Christ force healings on Christmas Eve and ran the Monday night Female Healing Clinic at the center.  She also performed house healings/blessings and assisted people in their transition to the next realm.  After this training was complete, Silvia continued to expand her spiritual experience and volunteered her time at the center for the next 4 years.  All while working full-time, raising two teenagers, entering into a new relationship and finding time for her yoga practice!

In December 2016, the spiritual centers door closed, but Silvia’s dedication to assisting others on their spiritual path was paramount and she continued to ask the universe “How may I serve?”  This is when she learned about the art of Reconnective Healing and in September 2017, she became a Certified Reconnective Healing Practitioner.  In 2018, as she continued to peel the layers, she found deep insight, release and transformation with several Clarity Breathwork sessions, an amazing DNA Reprogramming session with Geraldine Orozco and several months of intense work with Gary Blier and his Advanced Cell Training program.  This work not only healed her physically, it made it very clear that her purpose and mission in this life was to use her gifts to serve humanity and that it was time to step into that role.  After seeing Gail Lynn in an interview with Regina Meredith in December 2018, Silvia knew this was her path, the answer to her prayers and she responded to the universe with a resounding “Yes!”  Divine timing at its best!  She is absolutely grateful and feels so blessed to be able to bring this amazing technology to the Bay Area to assist others in their healing journey.